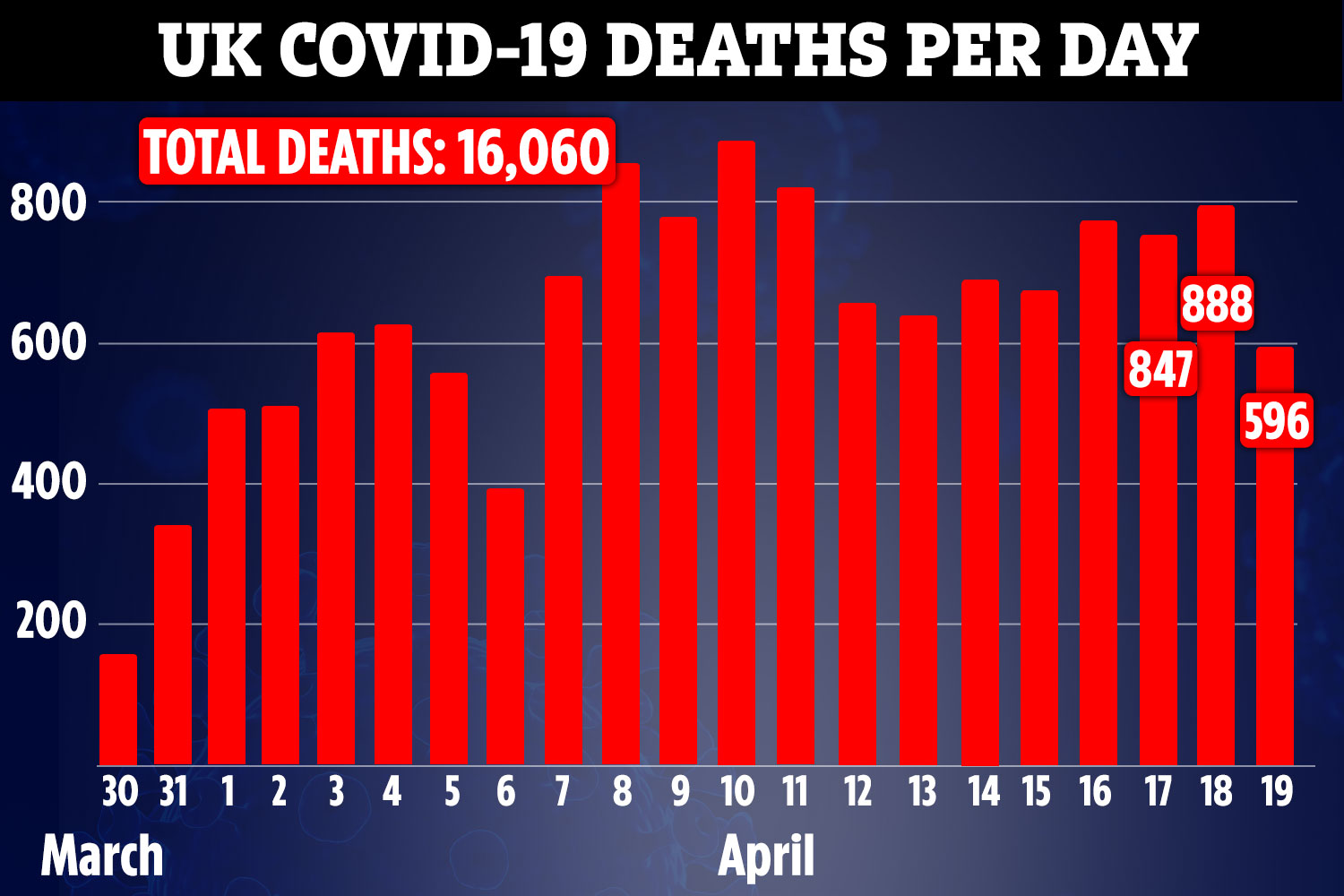 The daily death figures – about a third down from yesterday’s 888 increase – are generally lower on the weekends.

However, the rise in infection rates continues to be one of the highest yet.

England recorded a further 482 deaths in 24 hours, including patients aged between 34 and 104-years-old. Six of the latest fatalities, including a 52-year-old, had no known underlying health conditions.

Another 41 fatalities were reported in Wales, bringing its total to 575, while Scotland’s toll increased by 10 to 903.

Northern Ireland’s death toll increased by one to a total of 194.

It comes as it was revealed a secret “traffic light” masterplan to ease Britain out of lockdown in three stages has been drawn up by government scientists.

The first steps towards normal life could begin within the next four weeks if infection rates begin to fall.

Ministers have refused to discuss publicly when and how they aim to end the £2.5billion-a-day lockdown, entering its fourth week on Monday.

But critics hit out this weekend, saying the public shouldn’t be treated like children.

The UK is currently in full lockdown, with it extended for another three weeks into May.

However the potential exit strategy plans revealed over-70s could be forced to stay at home for a year.

Those in the vulnerable shielding category may have to wait until a vaccine is available before they can get back to normal life.

Mass testing and vaccines have been pinpointed as key measures to getting the country out of lockdown as the death toll continues to rise.

But Professor Sarah Gilbert, Professor of Vaccinology at Oxford University, today warned Brits could still catch the bug twice – and may need yearly vaccines against the bug.

She said: “I think it probably is likely that if somebody has been infected, they will be able to be re-infected in the future.”

Meanwhile, a huge military airlift that was set to deliver vital PPE gear has been delayed.

The source of the delay is not yet known, but it is understood the RAF were ready to transport the equipment, Sky News reported.

The delay comes as medics were told to treat coronavirus patients in flimsy plastic aprons over gowns.

Public Health England changed its advice on Friday to allow reuse of gowns that is normally single-use only or even wear white lab coats and wash them afterwards. 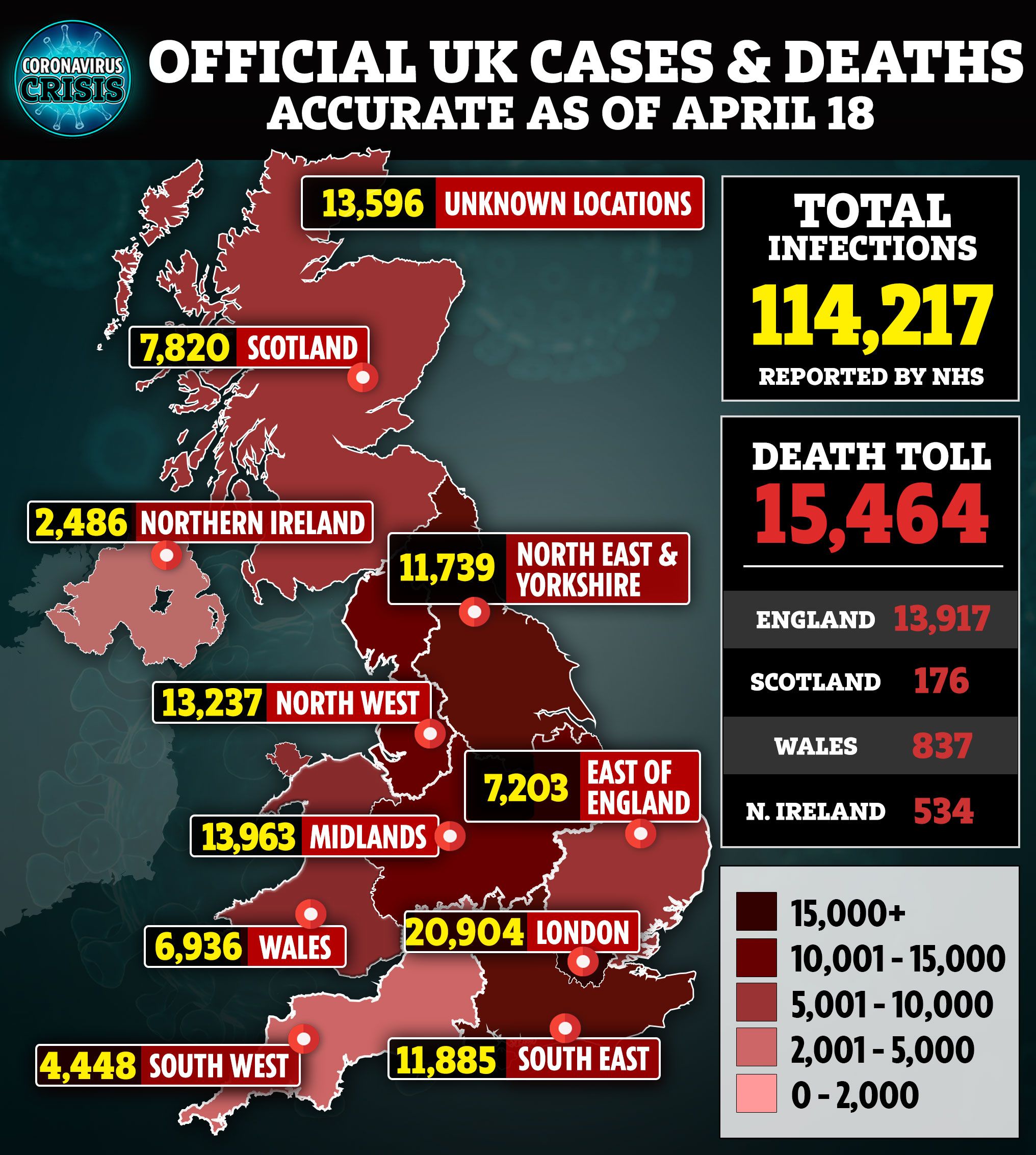 And the government has today been forced to defend its response to the pandemic after it was claimed Boris Johnson did not get a grip on the crisis until the beginning of March as he was occupied with Brexit and other issues.

It was reported the PM was absent from five COBRA meetings as the virus started to spread.

But Michael Gove defended Boris this morning, telling Sky’s Sophy Ridge: “The idea that the Prime Minister skipped meetings that are vital to our response to coronavirus is grotesque.

“There are meetings across Government, some which are chaired by the Health Secretary, some chaired by other ministers.

“The PM took all the major decisions.

“No one can suggest the PM wasn’t throwing his heart and soul into fighting this virus.

The PM is currently still recovering from his hospital stay at Chequers this weekend, and has not yet gone back to work.

On January 24, Mr Hancock said after the first COBRA meeting that the risk to the UK was “low”, even as it was starting to spread around the world.

This was despite scientists already warning alarm bells that the virus could be as deadly as the 1918 Spanish Flu, which killed 50million people.

It appeared that the growing alarm among scientists was not recognised by people in Government at the time.

The first coronavirus case in the UK was confirmed on January 29 – just five days later.

But sources insisted that even after our first cases, emergency plans were not activated quick enough.

One said: “Almost every plan we had was not activated in February. Almost every government department has failed to properly implement their own pandemic plans.”

It was claimed that austerity cuts in the last decade had slashed pandemic response plans, and that Britain was not prepared for a crisis.